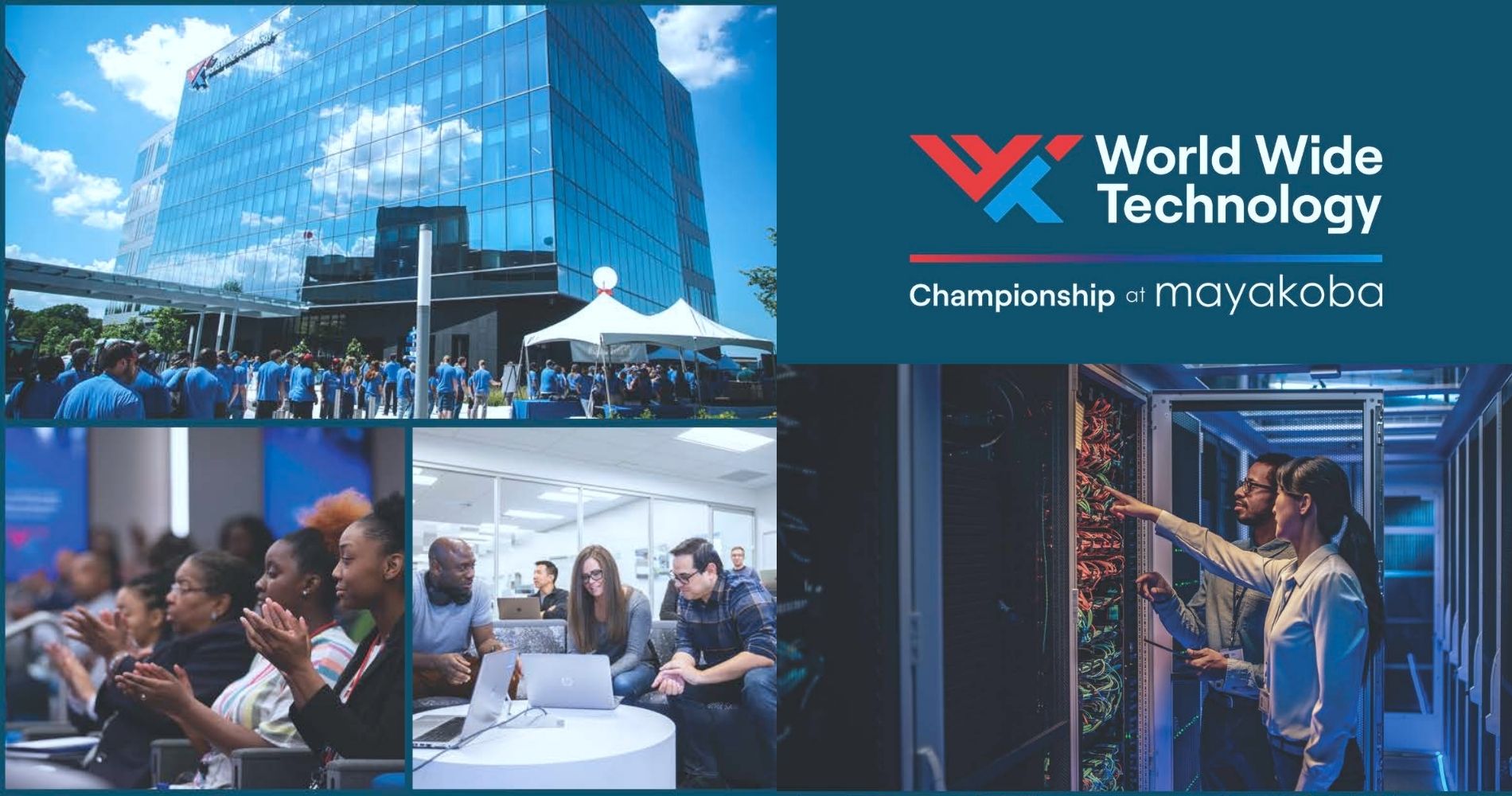 One week from today, World Wide Technology will officially debut as Title Sponsor of the PGA TOUR’s historic and pioneering tournament held annually on Mexico’s Riviera Maya when round one gets underway at the Mayakoba resort. The World Wide Technology Championship at Mayakoba will feature 132 PGA TOUR professionals, including defending champion Viktor Hovland of Norway, in four days of stroke play competition for a purse of $7.2 Million.

World Wide Technology, a $13 billion technology solutions provider, was announced in July as the title sponsor for the annual PGA TOUR event in a seven-year partnership that extends through 2027. The event is celebrating its 15th anniversary this year.

“We are thrilled for this partnership to tee off next week,” said Jim Kavanaugh, CEO and co-founder of WWT. “The World Wide Technology Championship at Mayakoba is an opportunity to positively impact local communities, while also being a part of exciting moments in golf. We look forward to gathering and creating change together for years to come.”

In the first year of the partnership, World Wide Technology and Mayakoba will welcome the tournament’s strongest field to date; including 14 different Major Champions, 15 players who participated in last month’s Ryder Cup, and a total of 267 PGA TOUR wins across the field of committed players. Ten players among the top-25 in the Official World Golf Ranking are scheduled to compete, including World No. 7 Justin Thomas and defending champion Hovland who is currently No. 17 in the ranking.

Other commitments include Brooks Koepka, Tony Finau, Abraham Ancer, Harris English, Tyrrell Hatton, Billy Horschel, Patrick Reed, Scottie Scheffler, Matt Fitzpatrick, Sergio Garcia, Justin Rose, Matthew Wolff, Will Zalatoris and many other top players. Players for the field of 132 competitors have until 5:00 p.m. ET on Friday, October 29, to commit to the World Wide Technology Championship at Mayakoba and can withdraw from the tournament at any time.

Thanks to the PGA TOUR’s international television distribution network, fans around the globe will be able to watch the World Wide Technology Championship at Mayakoba, which will position the brand in front of a global audience.

Due to ongoing COVID-19 restrictions and an abundance of caution, tickets for the public will not be available this year. Fans are encouraged to watch the World Wide Technology Championship at Mayakoba on Golf Channel U.S., Golf Channel Latin America, as well as special coverage on TV Azteca, Claro Sports, Televisa, Grupo Imagen, TVC Deportes, and many more media partners. The broadcast is also available in Latin America via live stream on GOLFTV.

ABOUT WORLD WIDE TECHNOLOGY CHAMPIONSHIP AT MAYAKOBA: The World Wide Technology Championship at Mayakoba made golf history in 2007 when it became the first PGA TOUR event to ever be contested outside the United States and Canada. A pioneer in Mexico, the World Wide Technology Championship at Mayakoba celebrates its 15th anniversary in 2021. The tournament annually features 132 professional golfers participating in four rounds of stroke play competition at the Greg Norman-designed El Camaleón Golf Club at Mayakoba in the Riviera Maya region of Mexico. Viktor Hovland of Norway is the current defending champion. Past champions: Fred Funk (2007), Brian Gay (2008), Mark Wilson (2009), Cameron Beckman (2010), Johnson Wagner (2011), John Huh (2012), Harris English (2013), Charley Hoffman (2014), Graeme McDowell (2015), Pat Perez (2016), Patton Kizzire (2017), Matt Kuchar (2018) and Brendon Todd (2019). In its history, the event has generated more than $3 million dollars in charitable contributions. The 2021 tournament will be held November 1-7.

World Wide Technology (WWT), a global technology solutions provider with $13.4 billion in annual revenue, combines the power of strategy, execution and partnership to accelerate transformational outcomes for large public and private organizations around the world. Through its Advanced Technology Center, a collaborative ecosystem of the world’s most advanced hardware and software solutions, WWT helps customers and partners conceptualize, test and validate innovative technology solutions for the best business outcomes and then deploys them at scale through its 4 million square feet of global warehousing, distribution and integration space. With over 7,000 employees and more than 55 locations around the world, WWT’s culture, built on a set of core values and established leadership philosophies, has been recognized 10 years in a row by Fortune and Great Place to Work® for its unique blend of determination, innovation and leadership for diversity and inclusion. With this culture at its foundation, WWT bridges the gap between business and technology   to    make    a    new    world    happen    for    its    customers,    partners    and    communities.    Conecta    con WWT: Twitter | Instagram | Facebook | LinkedIn

ABOUT MAYAKOBA: Nestled in the Mexican Riviera Maya, Mayakoba is a 620-acre resort and residential destination surrounded by the natural beauty of lagoons, jungle, tranquil waters and a sugar sand beach. Four meaningfully placed luxury hotels can be found within Mayakoba — Andaz Mayakoba, Banyan Tree Mayakoba, Fairmont Mayakoba and Rosewood Mayakoba — each with distinct personalities and amenities, perfectly complementing one another, and three collections of private residences, including Rosewood Residences Mayakoba, Fairmont Heritage Place Mayakoba, and The Reserve. Within the coveted destination are a wealth of lifestyle experiences including four acclaimed spas, more than 25 restaurants with eclectic cuisines and a village square that serves as an event space modeled after the historic Colonial plazas in Mexico. In addition, guests have access to a three-mile-long nature trail and spectacular 18-hole golf course designed by renowned architect and PGA TOUR legend Greg Norman, which is home to the World Wide Technology Championship at Mayakoba, first PGA TOUR tournament in Mexico.

ABOUT EL CAMALEÓN GOLF COURSE: Designed by legendary Australian golfer Greg Norman and inaugurated in 2006. Like the chameleon, from which it takes its name, the course offers constantly changing views as it winds through three diverse ecosystems: the tropical Mayan jungle, mangrove wetlands and the Mexican Caribbean Sea coastline. Distinctive hazards such as cenotes (sink holes), extensive bunkers and crystal-clear fresh water canals are unique features of El Camaleón, certified by Audubon International for its commitment to the environment.

El Camaleón is also home of the only Jim McLean Golf School in Mexico and Number 1 Golf School in America. The finest technology featuring Trackman, JC Video Analysis and other golf technology, allow instructors not just to learn, but to improve your game as much as you want. Also, its restaurant Koba Casa Club will give you the final touch to an unforgettable day of golf with spectacular views of the finishing hole, and fine dining based on fresh, local and high-quality products.