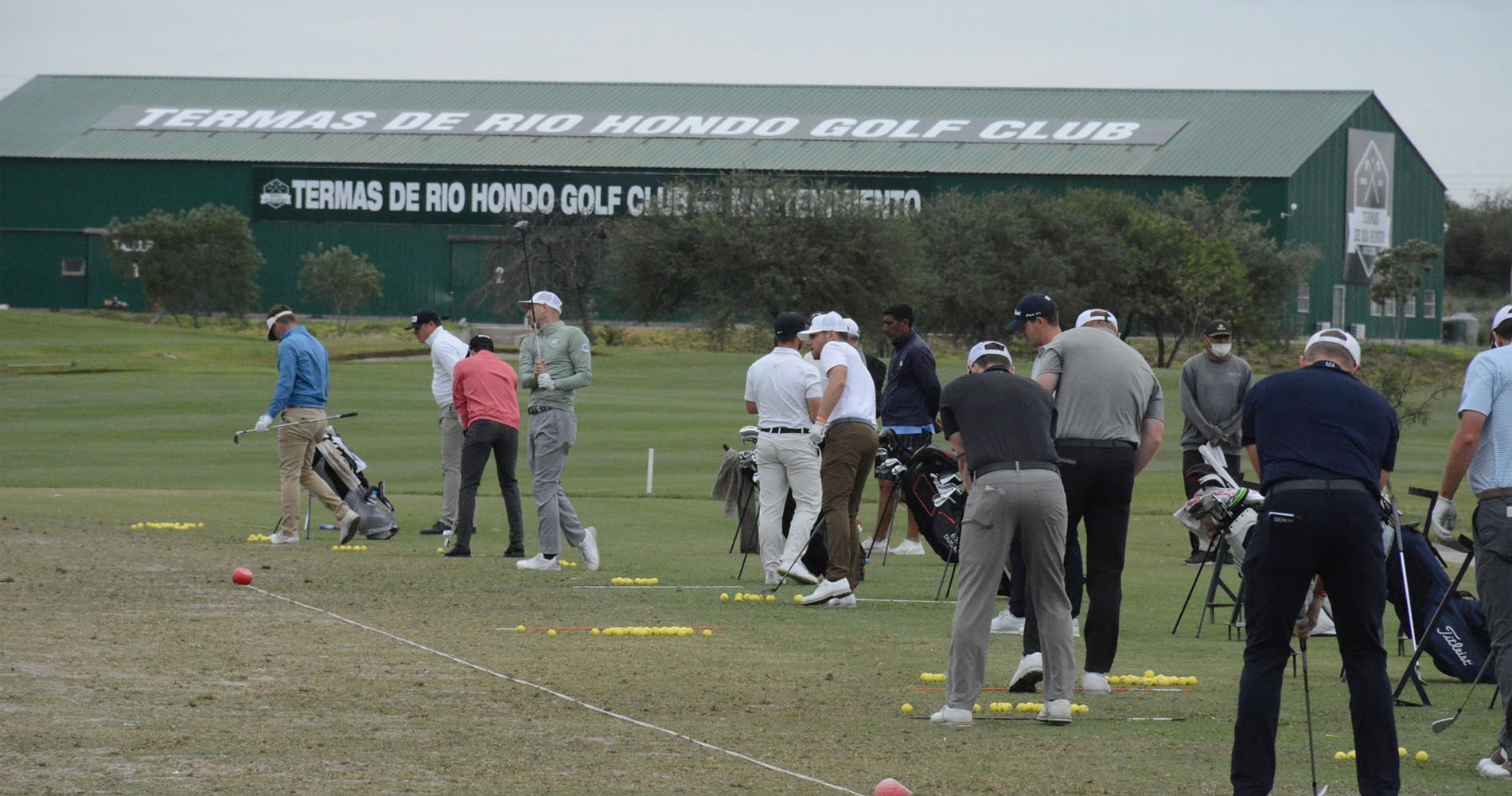 The co-leaders shot 6-under 66s late in the afternoon

Late in the afternoon of an overcast, windy and cool day, Tommy Cocha of Argentina and Kevin Velo of the U.S. fired rounds of 6-under 66 to share the opening-round lead at the 2022 Termas de Rio Hondo Invitational. The co-leaders started on 10, with Cocha going bogey-free and Velo recording seven birdies while playing in the last group that was able to finish before play was suspended due to darkness.

Cocha and Velo moved past a group of five players who carded opening 67s. Those five are led by Argentina’s Jorge Fernández Valdés, the man defending both the Totalplay Cup and the Zurich Argentina Swing standings lead.

In the tie for third, Fernández Valdés is joined by his fellow countryman Leandro Marelli and the American trio of Cole Madey, Mitchell Meissner, and Graysen Huff. There are 14 other players in a tie for the eighth spot at 4-under 68.

“I struck it nicely off the tee today. I believe I didn’t miss a single fairway or maybe just one,” said Cocha, the only one among seven players inside the top-3 to go bogey-free today. “I was very accurate on approach shots all day long. These green are playing fast and firm, so you have to be precise with your distance control.”

After opening the day with five consecutive pars off No. 10, the Salta native birdied holes 15, 18, and 1 to get going. He did the rest of the damage down the stretch, birdieing 5 and then finishing birdie-birdie.

“On 7, my sixteenth hole, I missed the green, but I sank a 15-footer to save par, so that final stretch really felt like a birdie-birdie-birdie finish,” added this PGA TOUR Latinoamérica veteran, a three-time winner in 117 career starts.

Velo was 1-under through eight holes, after birdies on 11 and 15 and his lone bogey of the day on 16. A birdie on 18 set things up for a strong front-nine of birdies on 2, 5, 6, and 9. That final birdie on 9, which allowed him to catch Cocha at the top of the leaderboard, dropped into the impending darkness.

“I hit a really good drive down 9 and I finish it up with 185 yards in. I tried to smash an 8-iron to get on the green, got it on the front edge, and two-putted for birdie. It was pretty simple, but I’m glad that I got it done because it was almost pitch-black,” said the San Jose State University alum who turned pro in 2020.

While Cocha has plenty of experience across Latin America, the 24-year old Velo is just starting his career on this Tour. “My dad was born and raised in Spain, my mom is half Cuban, half Irish, so I absolutely love the Latin culture. Being down here is awesome for me, it was one of the things I wanted to do, traveling South America, and I don’t think I would have that opportunity without this Tour,” said Velo, who despite not being fluent in Spanish manages to navigate the language barrier quite well.

Play was suspended due to darkness at 7:24 pm local time. The last group to make it in, got to the scoring area at 7:44 p.m. There were five threesomes unable to finish. The suspension will not delay the start of the second round, which this same wave of players is set to begin at 8 a.m. Friday.

Entering this event as the Totalplay Cup points list leader, Argentina’s Jorge Fernández Valdés carded a 5-under 67 to join a group of five players tied for third. The 29-year-old had opened with his only bogey of the day on 10, but picked up his pace with birdies on 11, 18, 3, 4, and an eagle on 6.

This is how the players inside the Totalplay Cup Points List top 10 stand through 18 holes:

After undergoing left shoulder surgery on December 8, Nelson Ledesma carded a 3-under 69 making his first competitive start of 2022. “I don’t have any expectations beyond walking and getting the rust off. I struck the ball nicely and played the course pretty well,” said the 31-year old, a notable PGA TOUR Latinoamérica alum who spent the 2019-20 and 2020-21 seasons as a PGA TOUR member.

Abel Gallegos, a 20-year old who won the 2020 Latin America Amateur Championship (LAAC) to earn a spot in the 2020 Masters Tournament and the 2021 Open Championship, carded a 3-under 69 in his first PGA TOUR Latinoamérica start as a professional. Following his successful amateur career, the Buenos Aires native turned pro playing two Argentine Tour events the two weeks preceding this event. Gallegos earned PGA TOUR Latinoamérica status with a T36 finish at the Q-School played at Mission Inn Resort and Club last November, but given his conditional number, he had to make the field through a sponsor exemption. Gallegos made two PGA TOUR Latinoamérica events as an amateur, a T54 finish in 2019 and a missed cut in 2021 at the VISA Open de Argentina.

Playing in the morning, former PGA TOUR winner Andrés Romero got off to a rocky start, going bogey-birdie-bogey-double-bogey off No. 10. Following seven pars, he had yet another bogey on 3, his 12th hole, to get to 4-over for the day. In typical Romero fashion, he went on to birdie four of the last six, three of them in succession to finish the day at even-par 72 to hold a piece of the 80th spot.

There are 32 Argentine players in this week’s field. The following are the scores and positions of those inside the top 55 and ties through the opening day:

“We played the past three days at 30-degrees and no wind at all, but today it was the complete opposite. It was pretty cold and windy, but the wind died down for my last four holes, the skies cleared up, so it was very nice late,”—Tommy Cocha

“The wind was very challenging early, but as the round went on, the wind slowly died down and by the end of the round it was pretty calm. It helped out the afternoon wave for sure.”—Kevin Velo

“With the wind picking up, coming from a different direction, we had to make a few adjustments, but it went well. Clearly, a round of 67 was a good one to have today,”—Jorge Fernández Valdés