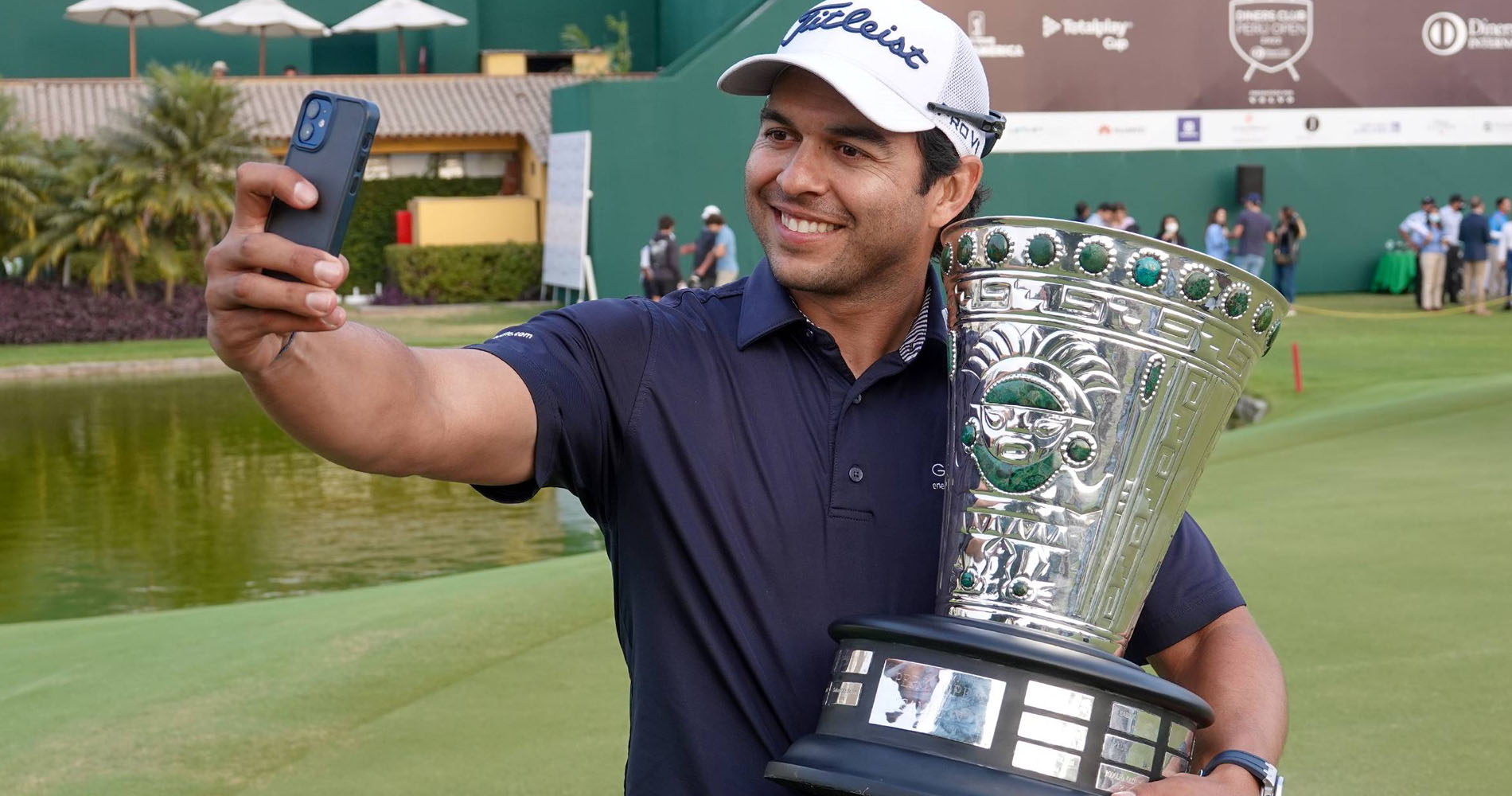 What started out looking like it would be an 18-hole battle among a handful of players in the final round of the Diners Club Peru Open presented by Volvo turned into a rout—thanks to José Toledo. The Guatemalan began the day alone in second place but seized control of the tournament during an impressive opening nine that saw him shoot a 6-under 30. His torrid play included a stretch, starting at No. 7, that saw him go eagle, birdie, birdie, birdie. During that 5-under streak, his lead ballooned to seven strokes, and he coasted from there, defeating Raul Pereda by six shots. Toledo earned 500 Totalplay Cup points to move into the third position, only 34 points behind Alan Wagner and 331 shy of overall leader Jorge Fernández Valdés

Fifty-four-hole leader Rafael Becker made three early bogeys on his disappointing day and never recovered. He tied for third with Mitchell Meissner.

While Toledo only played the back nine in even-par—two birdies and two bogeys—the win was his for the taking, and he knew it. He had inflicted enough damage on the field in his first 10 holes to put his game in cruise control the rest of the way. His show-stopping shot of the round occurred on the par-4 seventh. From the rough, and dealing with a tree that he felt could affect his shot, Toledo, from 110 yards, asked his caddie for a pitching wedge.

“I just wanted to leave it short because the pin was in the back, and I wanted an uphill putt,” Toledo explained of his strategy. Instead, the crowd surrounding the green erupted into a wild cheer as the ball landed and rolled into the hole. Toledo raised his hands knowing he had suddenly pulled significantly ahead of the field with his hole-out eagle.

“I had 110 yards to calm myself down,” he added of his walk up to the hole to retrieve his ball, knowing he still had 11 more holes to play. “(That shot) gave me momentum for the round, but the tournament wasn’t in my pocket and I had to adjust and calm down.”

He calmed down enough to birdie three in a row. “So, I did a good job there,” he added with a smile.

Toledo admitted he had more nerves with a big lead on the back nine than he did starting the day trailing.

“I was more nervous on the back nine for some reason. On the front nine, I was really calm. I was just hitting my shots and everything was clicking,” he continued. The nerves finally went away by the time he walked up the 18th fairway to the cheers of the large crowd gathered at what is traditionally one of the best-attended PGA TOUR Latinoaméricatournaments.

“Having a five- or six-stroke lead coming into 18 is actually more than what you’re looking for. I was just enjoying the walk, enjoying the shots, talking to my caddie and having a great time,” Toledo said.

Did you know it’s been exactly 1,820 days since José Toledo last won a PGA TOUR Latinoamérica event, the weather-shortened 2017 Essential Costa Rica Open? In between that victory and his triumph this week in Peru, Toledo teed it up in 39 PGA TOUR Latinoamérica events, played throughout the region, especially in his home country and in Mexico, saw action in 22 Korn Ferry Tour tournaments and even had one PGA TOUR Canada start.

(Through the 2022 Diners Club Peru Open presented by Volvo)

Although it was meaningless as to the final outcome, José Toledo three-putted the 72nd hole for bogey. Had he made par, he would have set a new course record. Instead, he will share the 72-hole record with Sebastian Fernandez, who shot a 22-under 266 to win the 2010 version of this event when it was still part of the Tour de Las Américas. The Argentine, who also won on PGA TOUR Latinoamérica’s inaugural season of 2012, is the head pro at Los Inkas, hired two months ago.

Cristobal Del Solar saw his consecutive streak of top-five finishes end at four, as he shot a final-round 74 to drop two scoreboard positions into solo sixth, keeping alive his streak of consecutive top-10s. Del Solar improved to fifth on the Totalplay Cup Points List and is a combined 63-under in his last five starts.

American Mitchell Meissner made it seven cuts in seven tournaments, with five of those finishes top-10s. Meissner tied with Raul Pereda for third, his third top-five of the season. He also tied for second at the Estrella del Mar Open and tied for fifth at the Abierto del Centro Memorial Eduardo “Gato” Romero in Argentina.

Both Paul Imondi and Willy Pumarol had disappointing final rounds. They didn’t lose any ground on the scoreboard, both beginning the day tied for seventh and finishing there. The two players shot 2-over 74s and could never make any sort of move up the leaderboard. Pumarol’s finish was particularly tough. Standing on the 16th tee Sunday, he was 2-under for his round. He double bogeyed that par-5, parred the 17th hole then double bogeyed his closing hole.

Cole Madey was the 18-hole leader, but after a pair of difficult rounds (72-74) Friday and Saturday, Madey recovered nicely on the final day, putting up a 6-udner 66 to move up 23 scoreboard positions into a tie for seventh. Madey made the turn to the back nine in 5-under, after three birdies and an eagle. He only made one more birdie the rest of the day, but the tie for seventh represents his career-best performance. Previously, a tie for 19th at the Termas de Rio Hondo was his top outing.

Only two players have had better relation-to-par nine-hole scores than the 6-under 30 Jose Toledo posted Sunday. Jorge Villar and Noah Steele both fired 7-under 29s on the back nine at the Estrella del Mar Open.

The 6-under 66 Sunday by José Toledo ties him with Matt Ryan for the lowest final round by a winner this season. Ryan also shot a 66 on his way to victory at the Estrella del Mar Open.

The 54-hole leader this season has gone on to win five of the seven tournaments. José Toledo is only the second player to come from behind on the final day to win. Jorge Fernández Valdés was tied for second, a shot behind Jeremy Gandon at the season-opening Visa Argentine Open but overtook Gandon to win.

There were 13 Peruvians in the field when the week began. Only Joaquin Lolas played all 72 holes. In the final round, Lolas shot a 2-over 70 to finish at 3-under for the tournament and tied for 43rd.

All six previous 2022 tournament champions were in action this week. Four of the six made it to the weekend. Leading the way was Alejandro Tosti, who carded a 72 Sunday. He finished at 8-under and tied for 19th.

PGA TOUR Latinoamérica is headed next week to Quito, Ecuador, for the Quito Open, the eighth tournament of the 12-tournament schedule. Quito Tennis and Golf Club is the tournament site, with current Korn Ferry Tour member Conner Godsey the last winner there, 11 months ago, when he outlasted Drew Nesbitt in a playoff.

“Actually, that’s a goal for the year, to go back to the Korn Ferry Tour. We still have five more events. I’m just looking forward. The job is not done yet, and I will still keep pushing, keep pushing.” – Jose Toledo

“I’m so happy to be back with a trophy. It’s been five years since I won on this Tour. I’ve been playing great golf the last year, here, in Mexico and in Guatemala. I’ve been knocking on that door for a while.” – Jose Toledo