Shah is brilliant, shoots 63 to grab lead in Quito 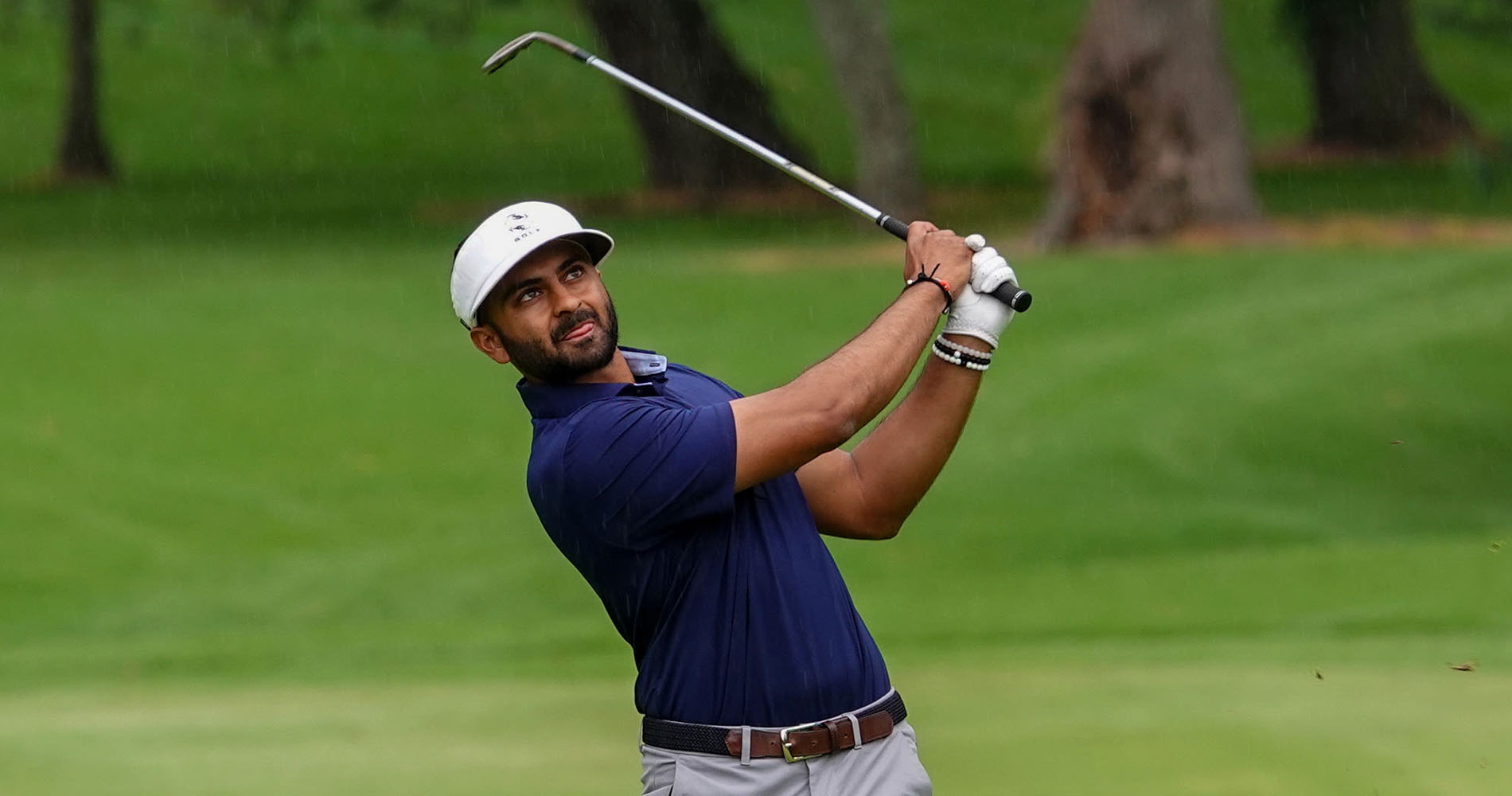 Manav Shah says he’s always had good vibes at Quito Tennis and Golf Club, so perhaps what he did in Thursday’s first round of the Quito Open should not be surprising. In his third time playing a PGA TOUR Latinoamérica tournament in Ecuador’s capital city, the vibe was really strong. Shah went out in the afternoon rain and proceeded to make eight birdies and an eagle against one bogey to tie the tournament course record with a 9-under 63. He leads Matias Simaski and Mitchell Meissner by two shots.

Included in Shah’s score was a 60-foot birdie putt on No. 15 and a 4-iron approach shot from 256 yards—thank you, 9,500 feet of elevation—to 18 feet on No. 3. From there, Shah rolled in the eagle putt. “I played that hole well,” he said. Truth is, Shah played just about every hole well despite the wet, sometimes sloppy conditions.

“It was cold and rainy out there, but I somehow managed to get hot,” Shah added. On his eagle putt, he was below the hole about 20 feet on the green on the right side. “It was perfect speed. That was probably the best putt I’ve ever hit,” he said of the bomb. “When it was four feet out, it was dead center. I thought, as long as it doesn’t hit a spike mark, I think it’s in.”

Fast starts here are nothing new for Shah in Quito. Three years ago, he opened with a 66, closed with a 68 and tied for 12th. Shah also had four par-or-better rounds in 2021 when he tied for 30th.

To this point, it’s been a disappointing 2022 PGA TOUR Latinoamérica season for Argentina’s Simaski. Recent trends show he might be turning the corner. After making his first cut of the season last week at the Diners Club Peru Open, Simaski opened the tournament with his 65.

That Simaski has good feelings toward Ecuador doesn’t hurt. The country is the site of his first win in a professional event, the 2015 Dev Series Final played at Arrayanes Country Club, also in Quito. The win he claimed as an amateur propelled him to 2016 PGA TOUR Latinoamérica membership.

“You can say I have a nice romance with Ecuador,” Simaski noted, thinking back to that win seven years ago as an amateur that convinced him to turn pro. Then there was his visit to Quito last year for the 2021 version of this tournament. While he was playing and missing the cut at Quito Tennis and Golf Club, Argentina closed its borders due to COVID-19 concerns, and government-imposed restrictions prevented him from returning to his home country. Those travel limitations forced Simaski to spend an extra 10 weeks in Ecuador until he could finally return home.

“It’s been like a love-affair, so it has been great,” he said of his home away from home.

Did you know Alejandro Tosti has only shot two over-par scores in the 27 rounds he has played in 2022? Tosti, a native of Argentina who played college golf and graduated from the University of Florida, opened with a 1-over 73 in his first round of the season, at the Visa Argentine Open. He then peeled off par-or-better showings in his next 19 rounds, with 13 of them under-par. A 4-over 75 in the third round of the JHSF Brazil Open ended his streak, but since then his scores are 68-70-71-67-72-66. This season, he is a combined 52-under. Even in his one missed cut—at the Termas de Rio Hondo Invitational—he finished at 2-under for his two days.

Manav Shah’s 63 was the fourth such score in Quito Tennis and Golf Club’s history of hosting PGA TOUR Latinoamérica tournaments. The first 63 came courtesy of Mexico’s Mauricio Azcué in the second round in 2014. Five years later, Argentina’s Clodomiro Carranza (first round) and Colombia’s Camilo Aguado (final round) matched that number. Azcué went on to tie for second with three others, five shots behind winner Tyler McCumber. Carranza also finished second the year he shot 63, six shots behind runaway winner Augusto Núñez, while Aguado tied for fourth, trailing by nine.

There are 11 Ecuadorians playing this week, six of them amateurs. Leading the way in the first round was JoséAndrés Miranda. He’s tied for 51st following his opening, 1-under 71. Here is the complete list of Ecuador natives playing this week and how they performed.

Brendon Doyle had a nice start to his Quito Open, with a 5-under 67. Doyle has missed his last two cuts, at the JHSF Brazil Open and the Diners Club Peru Open. He’s made the cut in his other five starts yet his best finish is a tie for 29th at the Termas de Rio Hondo Invitational.

Matias Simaski played his opening nine in 4-under and added two early birdies on his back nine, at Nos. 10 and 11, to get to 6-under. A bogey at the 15th dropped him back but he finished with a flourish, birdieing the 17th and 18th holes for his 65.

Last week’s winner of the Diners Club Peru Open, Guatemala’s José Toledo, did nothing to hurt his chances at making two wins in succession as he opened with a 4-under 68. Toledo made the turn at 4-under but posted two birdies and two bogeys on his back nine. In his last nine rounds, Toledo has eight under-par scores and one at even-par. In that span, he’s 42-under.

Even with a 68 in the opening round, José Toledo wasn’t able to match his first-round scoring average for the season. He came into this week’s tournament averaging 67.0 in his first rounds. Thursday, he shot a 68. In his six first rounds this season, Toledo has a 66, two 68s and three 67s.

With his opening 67, American Andrew Alligood is tied for seventh after 18 holes. Alligood has missed the cut in four of his previous five events, but he did get to the weekend last week in Peru, finishing alone in 58th place. Alligood’s 5-under score matches the 67 he shot in the second round of the JHSF Brazil Open as his low round of the season.

Sweden’s Linus Lilliedahl has shown a penchant for going low in the first round. His 67 Thursday is the third time this season he’s opened a tournament with a round in the 60s. He fired a 63 two weeks ago at the JHSF Brazil Open, and he opened with a 66 at the Estrella del Mar Open in February. His best finish this season is a tie for 12th after shooting that 66 to start in Mazatlan.

This week’s field is made up of players from 21 different countries.

The top-two players on the Totalplay Cup points list had their struggles Thursday, with Jorge Fernández Valdésopening with a 4-over 76 and Alan Wagner shooting a 77. Fernández Valdés has held the top position on the list for the entire season.

This is how the players inside the Totalplay Cup Points List top 10 stand through 18 holes:

American Blake Wagoner withdrew during the middle of his opening round due to injury.

“It feels good to come back to some poa annua (greens). We don’t see poa annua much on this Tour. It’s good to get that California grass out here.” –Manav Shah

“It feels good to come out here in round one and get off to a good start. I’ve been putting in a lot of work and it showed today.” –Manav Shah

“There was a key moment in my round. On hole 11, I hit driver left into a mound, then I laid up, hitting it past the fairway into thick, rough, and I couldn’t find [the ball]. I was starting to get nervous, but I found it right in the nick of time. It was deep in the rough, so I hit on the back end of the green, and I made about a 50-footer for birdie.” –Matias Simaski

“There are three or four holes where you have to pay attention, like No. 10. That’s one where I can’t hit driver because I’m at the limit of not hitting it past the water, so I have to lay up. Then the second shot is a long shot for me, with water. No. 16 too. Fortunately, I hit good shots on those holes.” –Matias Simaski

“It was a pretty solid round.” –Matias Simaski

“I like it. It’s an adjustment playing at 10,000 feet. The practice round and the pro-am I was still getting dialed in. Even today there were a few shots that were not the perfect yardage. But I’m getting there. It’s the wedges. It’s hardest, I think, with the wedges.” –Jeremy Gandon

I’ve had some good weeks of golf. Obviously the first tournament I had a margin that I wasn’t able to keep. You have to move on. I would have signed for second place before the week began. There are plenty of other opportunities.” –Jeremy Gandon assessing his overall play this season, including his 54-hole lead at the Estrella Del Mar Open that didn’t result into a win

First-Round Weather: Overcast and gloomy all day. Rain began falling at 9:55 a.m. The rain stopped at 1:25 p.m., but began again about 25 minutes later and rained steadily for the rest of the round. High of 54. Wind E at 2-4 mph.