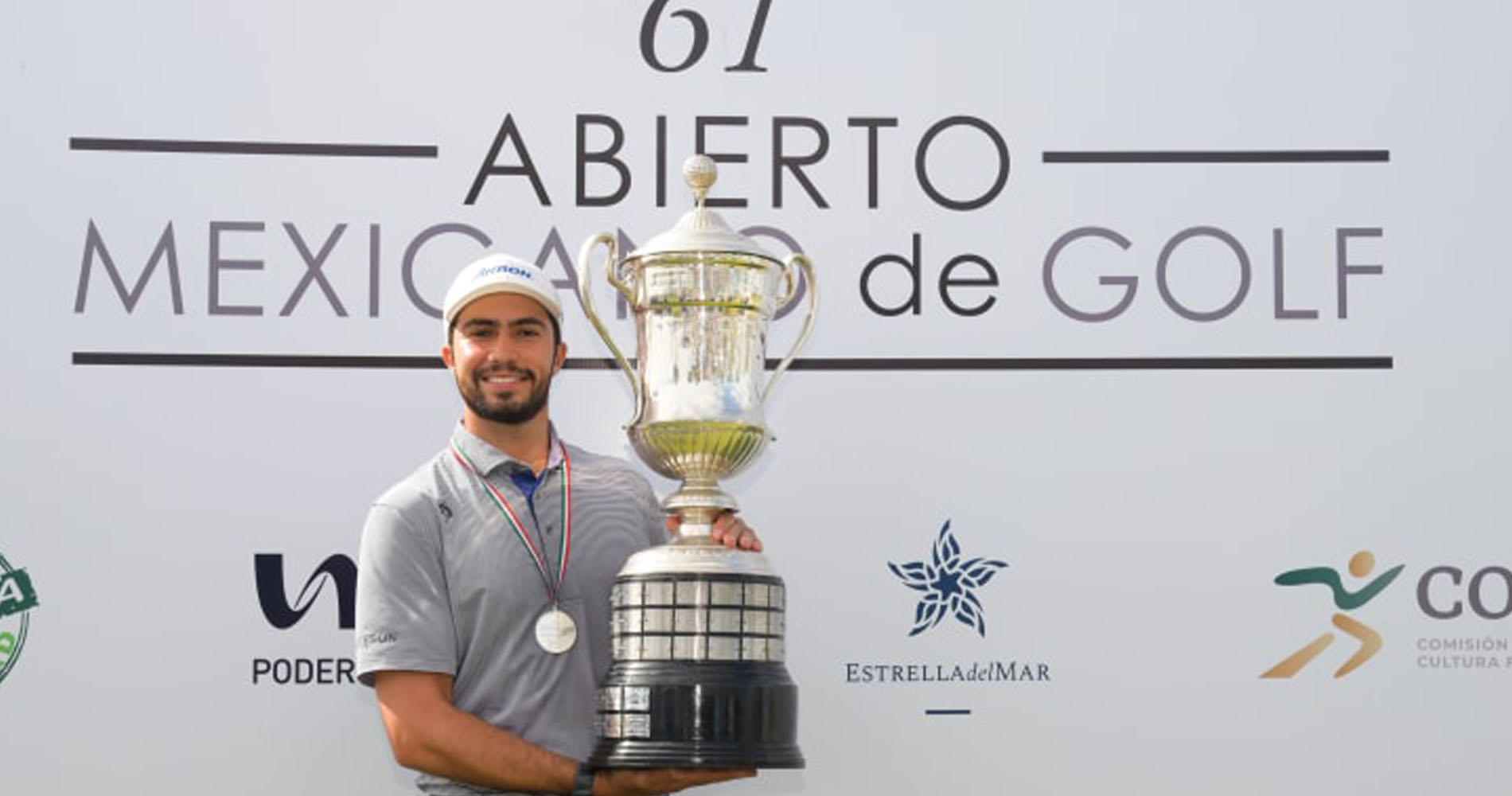 Alvaro Ortiz came to the 61st playing of the Abierto Mexicano—the Mexico national open—with a mission, and he accomplished it Sunday. A final-round, 9-under 63 that matched the lowest score of the day and week allowed Ortiz to charge from behind and win by three shots over tournament defending champion Drew Nesbitt and by four over 54-hole leader Jorge Fernández Valdés, his playing partners on this final day at Estrella del Mar Golf & Beach Resort.

“It was an amazing week. It didn’t go exactly how I planned, but it ended just as I had expected it. I have been working very hard for a finish like this, for my first professional win and to get it here, at the Mexican Open, in front of my family, in front of my home fans is amazing. There’s no better feeling!” said the 25-year old champion from Guadalajara, who by virtue of this victory also moved to the top spot on the PGA TOUR Latinoamérica Points List, supplanting MJ Maguire.

Ortiz entered the final day trailing by five shots but was hopeful of putting pressure on Fernández Valdés, who had seized control of the tournament with back-to-back 64s. “It was my job to put Jorge in a tough spot, to put pressure on him down the stretch, and that’s what I did,” said Ortiz, who led the tournament through 36 holes.

Off to a slow start Sunday, Fernández Valdés saw his lead shrink to two shots over both Ortiz and Nesbitt with only nine holes to play. All three players went on the attack on the back nine, but Fernández Valdés and Ortiz had more firepower and managed to separate from the Canadian.

“It feels amazing when you have that sort of a match against somebody out there fighting for a title. You know, the adrenaline is pumping, the nerves are high, everything quadruples. Well, at least that’s how it felt. We had a nice battle, with lots of birdies, eagles and many great shots,” said Ortiz of his head-to-head, back-nine battle with Fernández Valdés.

Fernández Valdés put together a string of four consecutive birdies, starting at No. 11, but Ortiz went after him with a birdie-eagle-par-birdie-birdie-birdie charge off No. 10. His birdie on the 15th put the two into a tie for the lead at 23-under with three holes to play.

“I had an impeccable stretch of golf holes. I putted unbelievable good, I was rolling the ball on line, and I was reading the greens well. I have been coming here a bit, so I know how these greens move. They are a little tricky. I was just fortunate enough to find the bottom of the cup quite often. I think I one-putted six out of nine times (on the back nine), so I’m just thankful that the work that I have put in paid off,” said Ortiz of the hot stretch that allowed him to put pressure on Fernández Valdés.

With his four-shot lead gone and both players battling the strong Pacific Ocean winds late in the round, Fernández Valdés struggled. The Argentine’s bogey at the par-3 16th, where Ortiz made a long putt to save par, left him a shot behind, and his double bogey on 17 pretty much sealed the deal. Ortiz pared the last two holes to remain at 23-under, while Fernández Valdés dropped another stroke with a bogey at the last to finish at 19-under. Nesbitt leapfrogged him with a birdie at the last to lock up solo second, at 20-under.

Did you know that Alvaro Ortiz’s brother Carlos, who is four years older, is currently playing his fifth season as a PGA TOUR member? Carlos first made it to the TOUR as the 2014 Korn Ferry Tour Player of the Year. He has made 127 career starts on the PGA TOUR, where he recorded his first win last November at the Vivint Houston Open. Carlos currently holds the 14th spot in the FedExCup standings.

The 61st Abierto Mexicano de Golf was supported by Unifin, CONADE and the Government of the State of Sinaloa.

Alvaro Ortiz became the first player from Mexico to win the Mexican Open since 2016, when Sebastián Vásquez defeated Augusto Núñez of Argentina in a playoff to claim the trophy in Aguascalientes.

By collecting 500 points as the tournament winner, Alvaro Ortiz increased his season’s point total to 838 to become the new Points List No. 1 player. Ortiz holds a 209-point advantage over MJ Maguire, who slipped into the second spot, with 629 points. The following are the updated Order of Merit standings through the fourth event of the 2020-21 season:

Through the Mexican Open

As the tournament champion, Alvaro Ortiz was also the leading Mexican player in the field. The following are the final positions and scores for the six locals who made it into the weekend:

Tournament defending champion Drew Nesbitt, who won the last edition of this event, at the Tijuana Country Club in May 2019, shot a final-round 67 to secure runner-up honors. This was his second-best career PGA TOUR Latinoamérica finish. He’s collected four top-10s in 18 career starts.

Jorge Fernández Valdés missed tying the all-time record for career PGA TOUR Latinoamérica wins. His victory total remains at three. This was also his second time he’s failed to convert a 54-hole lead into a win at the Mexican Open. Previously, at the 2013 tournament at the Club de Golf Mexico in Mexico City, he led by one through 54 holes but carded a final-round 74 to tie for third, three shots behind tournament winner Ted Purdy.

There’s something about Mexican Open weekends and Rodrigo Lee. In Sunday’s final round, the Brazilian matched the tournament low score of 9-under 63. He joined opening-round leader Tommy Cocha and tournament champion Alvaro Ortiz with that score. The 33-year old from Sao Paulo, had nine birdies Sunday for a bogey-free performance that allowed him to tie for fourth, just as he did last year at Estrella del Mar. His final-round 63 matched Lee’s PGA TOUR Latinoamérica career low round. Coincidentally, he recorded his two previous 63s during the third round of the past two editions of the Mexican Open at Tijuana Country Club, in 2018 and 2019.

A PGA TOUR Latinoamérica conditional member who joined this week’s field as a Monday qualifier, Ben Cook, converted his first start of the season into a tie-for-fourth finish. Cook shot a 4-under 68 to join Rodrigo Lee at 16-under for the week. The top-four performance was also a Tour career best for the 27-year old from Caledonia, Michigan, whose best showing prior to this week was a tie for 25th at the 2019 Costa Rica Classic.

PGA TOUR Latinoamérica will observe a six-week break before conducting its fifth event of the season, the Banco del Pacifico Open presented by Quito Alcaldia, on May 10-16 in Quito, Ecuador.

“Since I joined the Tour as a Q-School medalist, over a year ago, it was one of my main goals for the season to finish as the top player on PGA TOUR Latinoamérica. I know it’s not an easy task and there’s a long way to go, but that’s what I would like to accomplish this year.” —Alvaro Ortiz on moving into the Points List top spot

“All the past Order of Merit winners have been able to move up and have a strong career on both the Korn Ferry Tour and the PGA TOUR, so I would like to follow in their footsteps and eventually be on the PGA TOUR battling for tournament titles.” —Alvaro Ortiz

“Finishing third, I leave with quite a bitter taste.”—Jorge Fernández Valdés after dropping a four-shot lead on the final day

“Alvaro played unbelievably well. A round of 9-under is huge on a Sunday. His putting was great today. He made a lot of putts today, like the one on 16, a long one to save par. I was unable to make the up-and-down there and he went up by a shot. He played really well today.”— Jorge Fernández Valdés