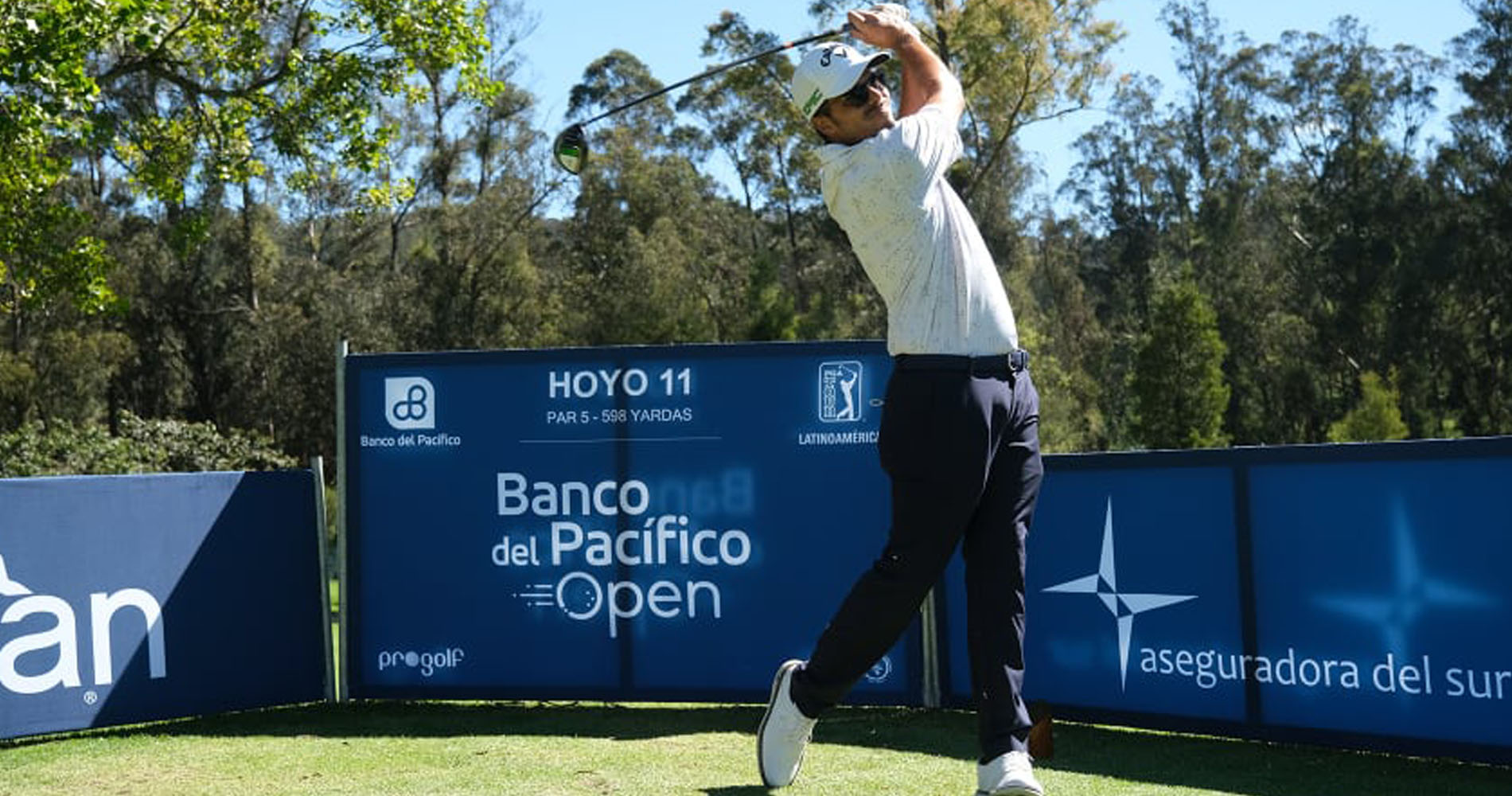 Canada’s Drew Nesbitt and Chile’s Cristobal Del Solar posted rounds of 6-under 66 to share the opening-round lead at the Banco del Pacifico Open in the capital city of Ecuador. Nesbitt carded his 66 during a morning of ideal conditions, while Del Solar had to endure tougher conditions, with the wind picking up in the afternoon at Quito Tennis & Golf Club.

Starting at 7 a.m. off No. 1, Nesbitt turned an unfortunate break on the second hole into his first of four consecutive birdies. “The sun was right on our eyes, but I hit a really good golf shot. I didn’t even know where it went, but it was about twelve feet away and I made it,” he said of the terrific 230-yard 6-iron he hit at the downhill par-3.

His birdie string was followed by back-to-back bogeys on Nos. 6 and 7, but he bounced back with a birdie on 8 and then closed out the round with birdies on three of the final four holes.

Coming off consecutive missed cuts, Nesbitt needed a start like this to get his confidence back and defend his spot inside the PGA TOUR Latinoamérica Points List Top 10. “The last two weeks I put too much pressure on myself, getting a little bit too stressed, so I just tried to relax a little bit and play confident golf out there. It worked really well today,” said the Toronto native, who entered this week ranked eighth on the season-long race to move up to the Korn Ferry Tour.

While Nesbitt enjoyed perfect conditions, in the afternoon Del Solar saw the wind pick up to make the course play a lot tougher. “The greens are good, but late in the day they were a little bumpier. I know the course was playing really hard, but I played extremely well. I made a ton of putts and that was pretty helpful,” said the Florida State University alum.

Coming into this week, Del Solar wasn’t as confident as today’s score shows. Having shot 73 or a higher score in five of his six rounds during the past two editions of this event, he was wondering how to turn things around.
“During the practice rounds I was hesitant about a game-plan, so I reached out to Horacio León,” said Del Solar, who had a call with his countryman who won this tournament in 2018. “I needed to know what the recipe for success was and he was kind enough to provide several tips that helped me a lot today.”

One of those tips gave him direction about how to play the opening hole, a pretty straight downhill par-4, where Del Solar had recorded several bogeys in the past. León advised him to hit driver right, into the ninth hole fairway. “That’s exactly what I did today. I hit driver and then I hit my second shot close, and I made the putt. I think I had never birdied that hole before, so
that was great,” said the 27-year-old who went on to have a strong birdie-par-birdie-birdie start.

Halfway through the round he bogeyed Nos. 7 and 10, but then caught fire again with four birdies coming in on Nos. 12, 14, 16 and 17 to finish off the cool Quito afternoon.

“This year has been a bit tough for me,” said Del Solar, who entered the week ranked 27th on the Points List. “I’ve been working on a couple of swing changes throughout the year, but I haven’t played much to test those adjustments under pressure. Now, with a nice series of consecutive tournaments you kind of get into rhythm and things start to work out. Hopefully, we can finish the season well.”

Did you know Drew Nesbitt had the first and only 59 ever recorded on PGA TOUR Latinoamérica? Coming off an opening 8-over 79 at the 2018 Brazil Open and just trying to make the cut, he went on to fire a second-round 12-under 59 that featured three eagles. He was unable to maintain the momentum into the final two rounds, shooting 73-70 to tie for 49th.

Key Information
This is a 72-hole event with a cut for the top-55 and ties through 36 holes.

Luis Fernando Barco (five birdies), Brad Schneider (five birdies) and Isidro Benítez (one eagle and three birdies) were the only players inside the top 10 who recorded bogey-free rounds. The three of them made it into the tie for third at 5-under 67.

Coming off a victory Sunday at the Holcim Colombia Classic presented by Volvo, U.S. player Sam Stevens carded a 3-under 69 to start this tournament in a tie for 17th. Today’s 69 was the tenth consecutive round in the 60s for the man who currently owns the lowest scoring average on PGA TOUR Latinoamérica (68.00).

Holding an 80-point lead over Stevens on the Points List, PGA TOUR Latinoamérica No. 1 Brandon Matthews also opened with a 3-under 69. Starting off No. 10 in the afternoon, Matthews had three birdies and a bogey on the back nine before recording only one birdie and eight pars on the front.

This is how the players inside the Points List top 10 started the tournament today:

Luis Fernando Barco (T2 at 5-under) and Alvaro Ortiz (T66 at par) made it to Quito after making their U.S. Open debut last week at Torrey Pines. Both of them made it through Sectionals to qualify for that major championship, with Barco making history as the first Peruvian player ever to compete in a U.S. Open. Both of them missed the cut, with Barco finishing at 14-over and
Ortiz at 15-over.

José Andrés Miranda, the only PGA TOUR Latinoamérica member from Ecuador, posted a 2- under 70 to tie for 30th. The 26-year-old from Quito had an eagle, two birdies and two bogeys to be the only local currently inside the cut line. The next best is Eduardo Yépez, an amateur who made the field by tying for second in the Monday Qualifier. Yépez happens to be one of the players Miranda teaches in his role as head coach for the Ecuadorian Golf Federation.

“We got a really great draw. This morning there was hardly any wind at all. It was sunny, the temperature was great, and the course was in immaculate condition.”—Drew Nesbitt

“Starting this three-week stretch, I was fifth on the Points List. Unfortunately, I missed back-to-back cuts, which kind of put me down a few spots. This week is important for me, because I’m trying to fight to make sure I can stay in that top 10, or even move back into the top-5, to make
it to the Korn Ferry Tour. This is a good steppingstone to having a good week, so I’m looking forward to the rest of the week.”—Drew Nesbitt