Montenegro holds on for victory in season-ender 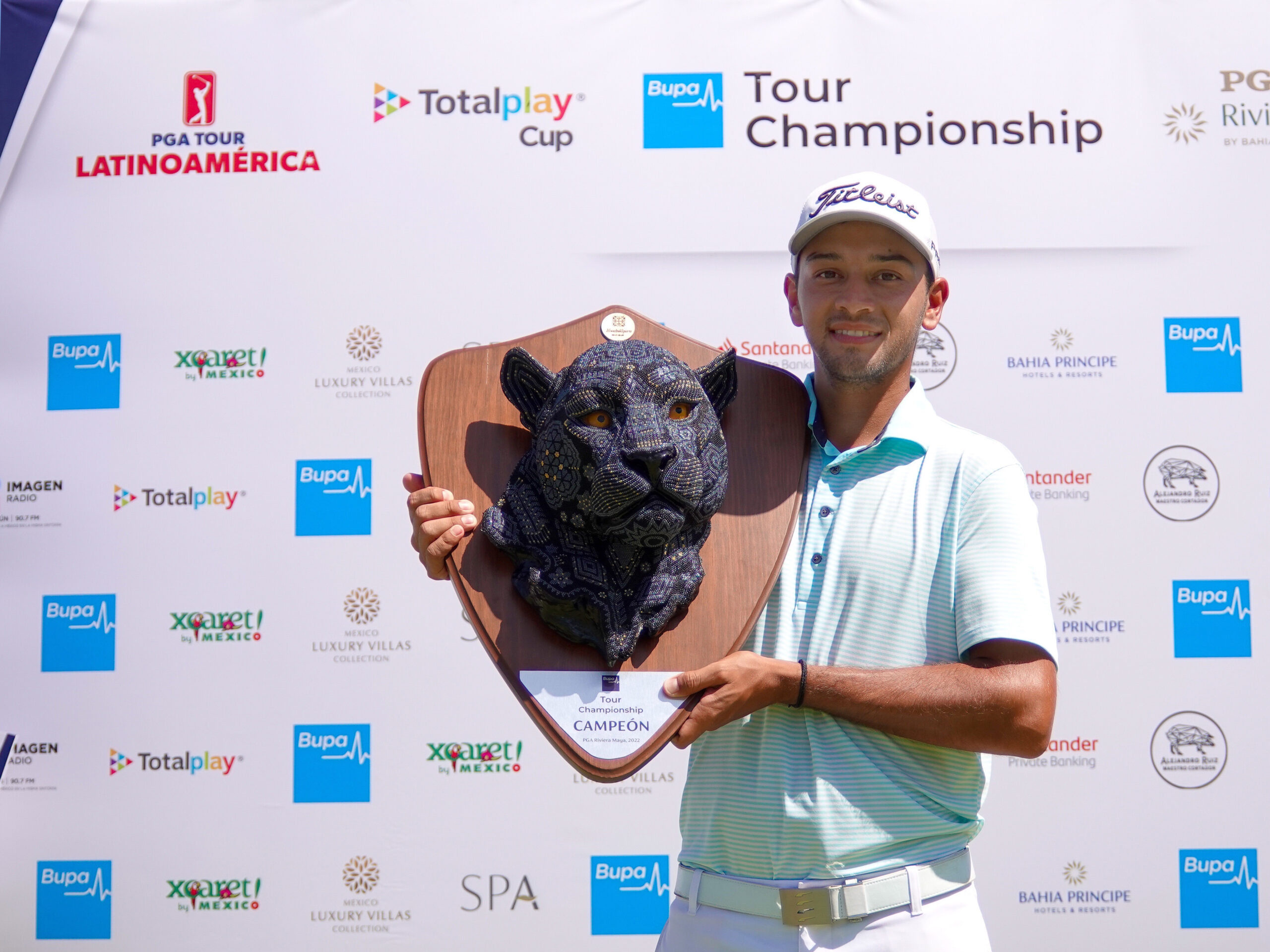 Montenegro holds on for victory in season-ender

TULUM, Mexico—As a rookie in the 2021-22 season, Jesús Montenegro has had his ups and downs as he got his feet wet in professional golf. The 25-year-old native of Mar del Plata, Argentina, by way of Alabama’s Jacksonville State University, had made five cuts in his previous 10 PGA TOUR Latinoamérica starts, with one top-10 finish to his name.

He now has two.

Montenegro, at No. 59 in the Totalplay Cup rankings, was the second-to-last player to qualify for this week’s 60-player field, and he used three under-par rounds to enter the final round of the season-ending Bupa Tour Championship with the 54-hole lead at steamy PGA Riviera Maya. Montenegro shot an even-par 72 Sunday, and that was enough for him to hold off countryman Andrés Gallegos and Manav Shah for the triumph, preventing Shah from winning for a second time this season and keeping Gallegos winless since 2018. Montenegro’s two-stroke victory was worth 600 points, and that was important as he moved from No. 59 when the tournament began to No. 10. The top-10 in the final Totalplay Cup standings all earned 2023 Korn Ferry Tour membership. Montenegro still plans on attending the Tour’s Qualifying Tournament with the hope of improving his status.

“That’s crazy. That sounds amazing in my first year,” Montenegro said of the Korn Ferry Tour and his sudden change of fortune.

And Montenegro did all this Sunday while surviving a late double bogey that looked like it might doom his chance at victory. At 8-under and seemingly in control midway through his back nine, Montenegro had a bad swing on his 15th-hole tee ball. “On this course, you can get penalized like that,” he explained matter-of-factly of the double-bogey that shortened his lead to one at the feared par-3.

Montenegro immediately turned his thoughts to No. 16, a hole he said was the turning point of not only his round but the tournament. Probably a little rattled by the double bogey, Montenegro hit a poor tee shot to the left, leaving him with 270 yards to the green. He chose to lay up to 90 yards on the par-4, but his third-shot approach flew to the back of green. No problem. He poured in the 25-foot putt for the unlikely par to maintain his two-stroke advantage and, more importantly, some semblance of momentum.

“I needed that one in that moment, and I did it.”

That wasn’t his only improbable result on a hole during his final round of the season. After making the turn to the back nine, Montenegro hit his tee shot left into the trees on No. 10. He had to hit a high draw over the water for his second shot, hoping to somehow get the ball on the green. He didn’t, but he found his ball in the fringe. After examining his options, he chipped in for the birdie.

“That was another crazy moment of the round,” he continued, saying that when that chip dropped he began thinking that maybe it was going to be his day. “I got a feeling.”

Gallegos knocked himself from contention with a bogey on the par-5 16th, and Shah did the same thing. The trio of Montenegro, Gallegos and Shah all parred the final two holes, handing Montenegro the victory.

“I just finished. I don’t really understand what really happened. I know I will realize it in a couple of hours what I did today,” Montenegro said, almost more puzzled than happy. “I knew I needed something like this before I came (to Mexico). I was doing the right thing by taking the week off. I think it paid off.”

Through seven holes, Argentina’s Jorge Fernández Valdés had the lead, and at that moment he projected to move from No. 3 in the Totalplay Cup standings to No. 1. It wasn’t to be, as the wheels came off after that. Fernández Valdés made three consecutive bogeys, starting at No. 8, then made three more in a row, beginning at the 13th. The silver lining is Fernández Valdés still finished third in the standings and earned Korn Ferry Tour membership. Mitchell Meissner led the Totalplay Cup going into the final tournament, and he emerged the winner, taking Player of the Year honors, as well. Chile’s Cristóbal Del Solar finished second, with American Kevin Velo and Argentina’s Alejandro Tosti rounding out the top five.

Did you know Jesús Montenegro reached as high as No. 311 in the World Amateur Golf Ranking? His top performance was a victory at the 2019 Ohio Valley Conference Championship, winning the individual portion of the tournament by three strokes over Jacksonville State teammate Quim Vidal Mora from Spain.

The 2022 Bupa Tour Championship was a no-cut, 72-hole event closing the 12-event 2021-22 PGA TOUR Latinoamérica season. Fifty-seven of the 60 eligible players competed this week. They were seeking the following benefits:

Of the 25 players who received some sort of Korn Ferry Tour benefits, they represented 10 different countries. Leading the way was Argentina, with five players finishing inside the top 10 and an additional two in the 11-through-25 category. The U.S. had seven players, with Mexico contributing four. The other countries were Chile, Colombia, Guatemala, France, the Netherlands, South Korea and Brazil.

France’s Jeremy Gandon had the misfortunate of being the player in the 11th position in the final standings. While he automatically qualified for the second stage of the Korn Ferry Tour Qualifying Tournament, Gandon missed on qualifying for the final stage. He finished 109 points behind No. 10, Jesús Montenegro.

American Davis Shore had a nice final round, shaving eight strokes off his third-round score of 77. He moved up 12 leaderboard spots, into a tie for 13th.

Raúl Pereda and José de Jesús Rodríguez, who finished the season ranked 12th and 15th respectively, were the leading Mexican players on the Totalplay Cup standings. As such, each of them earned additional bonuses of U.S. $5,000, courtesy of tournament sponsor Bupa. The following were the Totalplay Cup Points List final positions for the 8 Mexican players who reached the season-ending event:

Final stat leaders of the season included Player of the Year Mitchell Meissner recording the most birdies (216), best scoring average (68.81) and the best par-4 performance (a cumulative 50-under). Jeremy Gandon and Meissner shared par-5 honors, the duo both 90-under on par-5s this season. Camilo Aguado and Kevin Velo topped the par-3 chart, cumulatively 1-under each.

Mitchell Meissner and Camilo Aguado were the only players who made all 11 cuts and qualified for the season-ending Bupa Tour Championship this season.