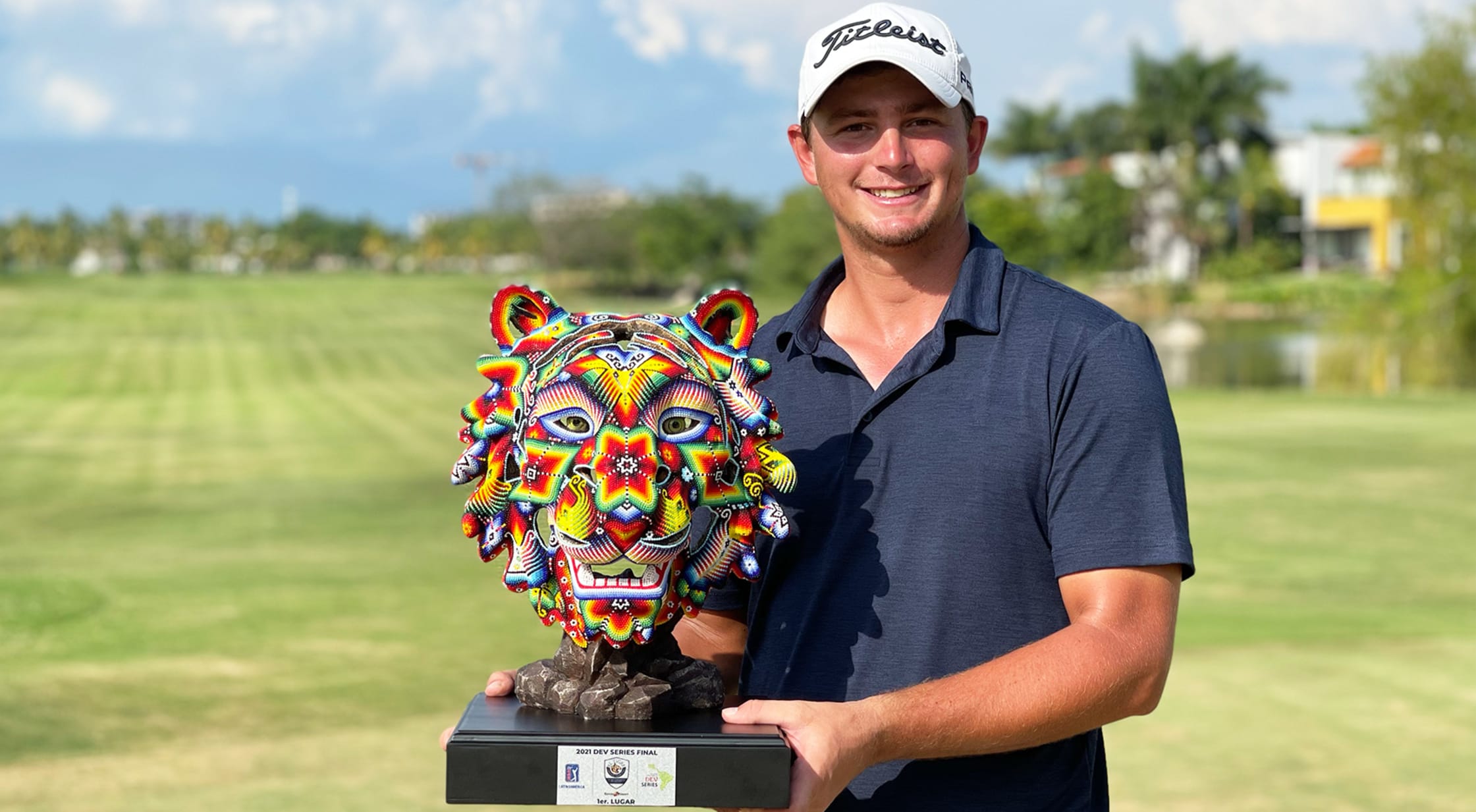 After posting a final round, 6-under 66 to finish the Dev Series Final at 16-under, shooting 13-under for the final two days, Roland Massimino was happy to accomplish his goal of re-earning his PGA TOUR Latinoamérica card. He thought his job for the week was over, not knowing there was more golf for him to play.

That extra golf ultimately led to his first career victory as a professional.

“Walking off 18, I was really happy that I did my job in getting my card back,” recalled the 24-year-old from Villanova, Pennsylvania. “Twenty minutes later, when the final group came in, I saw that I was in a playoff. I ran over to the range to hit a few balls really quickly because I had been sitting down. I got warmed up and was able to put two pretty good holes together in the playoff.”

Holding a five-shot lead entering the back nine, 54-hole leader Jaime López Rivarola seemed to be cruising Sunday. However, he was unable to keep the pedal down. Through 54 holes, he had played the first five holes on the back nine at 12-under. Sunday, he could only shoot 1-under on that stretch, failing to make eagle at the par-5 14th for the first time. A double bogey on the 16th, where his approach shot went in the water, dropped him to 16-under.

“I was in between clubs, the pin hidden right. I wasn’t aiming at the flag, just looking to hit the middle of the green. But I had a tough lie in the fairway, and I hit a bad shot,” said López Rivarola of his approach shot splashing into the water. “I tried to keep going, and I knew that I needed a birdie on 18. I hit a good putt, a 15-footer that dropped opposite of what I was thinking, and that got me into a playoff.”

The overtime session took Massimino and López Rivarola back to the 18th tee to face a fearsome, 612-yard par-5 with water to the left. López Rivarola made a great up-and-down from a green side bunker to match Massimino’s par on their first playing of the hole, but back on the tee, his drive went left into the water. He ended up recording a double bogey-7, with Massimino making a 5 to secure the victory.

“(This win) means a lot,” said Massimino, grandson of Rollie Massimino, the legendary college basketball coach who led the Villanova Wildcats to the 1985 NCAA title. “I’ve been working really hard this year just to get to where I’m at. Just to see the results come to fruition is really special for me. It’s been a grind the last couple of years with everything, and I’m really happy to get this done and be able to play on PGA TOUR Latinoamérica next year.”

Behind Massimino and López Rivarola, three other players earned full exempt membership for the 2021-22 Latin American season. Mexico’s José Narro shot 69, sinking a 12-footer for birdie at the last, to finish solo third, at 15-under. Joel Thelen of Fort Worth, Texas, shot 69, as well, to take the fourth spot, at 14-under. Colombia’s Iván Camilo Ramírez posted a 70 for a fifth-place finish, at 13-under.

The next stop for the new members will be the season-opening 115th VISA Open de Argentina presented by Macro, at Nordelta Golf Club from December 2-5. The event kicks off the 12-tournament schedule and will mark the start of the race for the Totalplay Cup, the new season-long points competition leading PGA TOUR Latinoamérica players to the Korn Ferry Tour.

How the Dev Series Final Worked

Sixty-five players entered the no-cut tournament this week, and 63 finished all 72 holes. Below is the breakdown of the various PGA TOUR Latinoamérica membership statuses players earned this week at El Tigre Club de Golf.