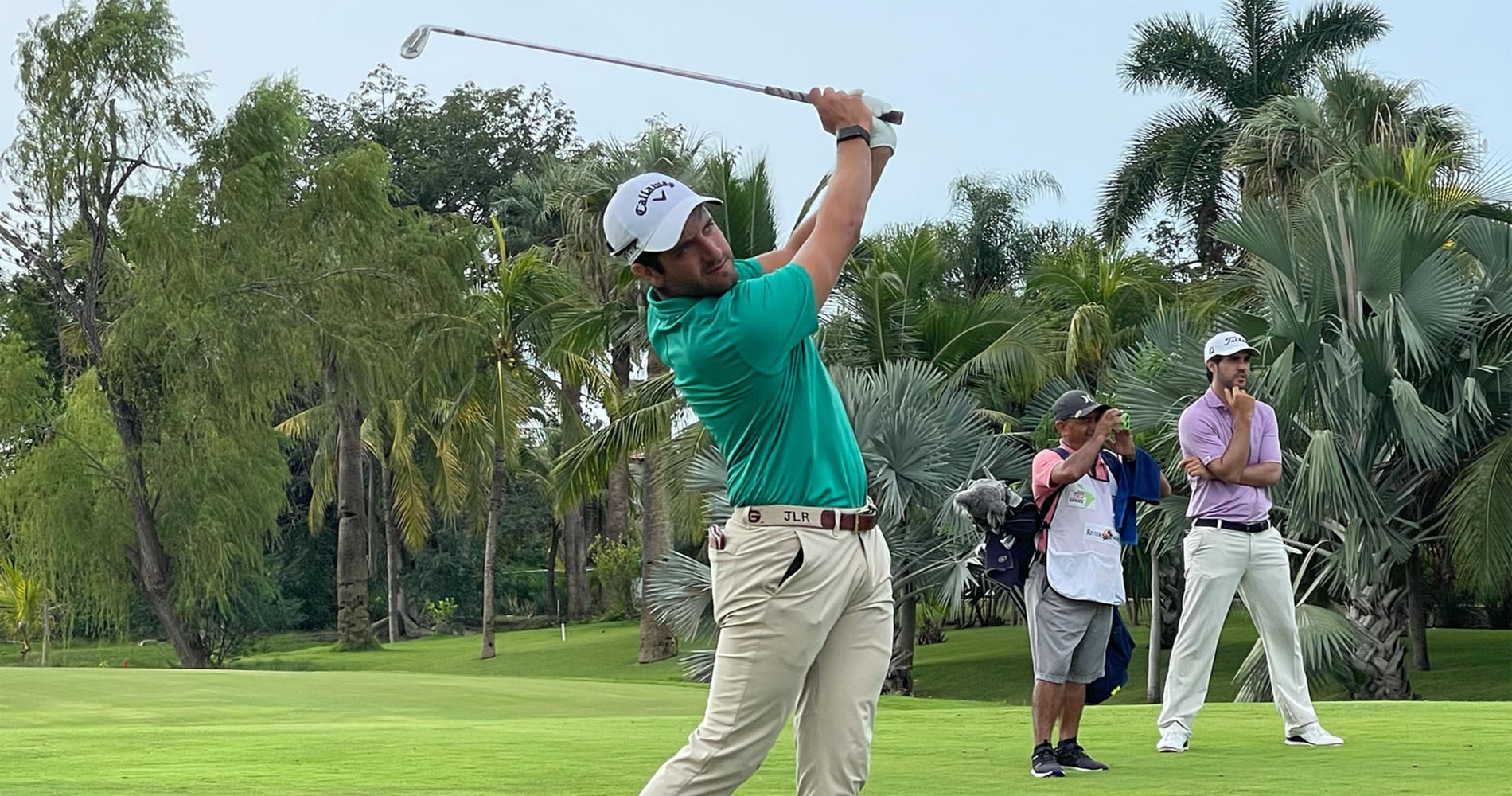 At 16-under 126, López Rivarola finished the day holding a two-shot lead over his countryman Andrés Gallegos, who followed an opening 63 with a 65. Chile’s Cristóbal Del Solar holds the third spot, at 12-under, with American Mitchell Meissner in fourth place, at 11-under and New Zealand’s Charlie Hillier in fifth, at 10-under.

The low total for the first 36 holes of a tournament that López Rivarola matched Friday was set by his countryman Alejandro Tosti, who also carded back-to-back 63s to start the 2020 Puerto Plata Open. The low first 36 holes in relation to par is the 17-under 127 set by American Ken Looper at the 2016 Colombia Open.

Starting the day in a tie for the lead with Gallegos and Sweden’s Linus Lilliedahl, who carded a 70 to drop into a tie for sixth at 9-under, López Rivarola recorded two eagles and four birdies Friday to move ahead of the pack at the undulating, 6,830-yard par-71 Fazenda Boa Vista.

“Compared to [Thursday’s] round, this one was not as sharp off the tee. I wasn’t as precise, but I was able to recover with my approach shots. The putter stayed hot, giving me peace of mind, knowing that I could recover in case I missed any green. I’m very happy with the way I handled things after [Thursday’s] round,” said the 27-year old leader, a University of Georgia alum playing his fourth full season on PGA TOUR Latinoamérica.

López Rivarola got things going with an eagle on No. 3, where he unexpectedly drained a 30-footer, and a birdie on No. 4. Then, he had back-to-back birdies on 9 and 10, birdied 16 and finished the day with another eagle at the last.

“No. 18 was a perfect hole. I wasn’t hitting the driver that well, I had missed the last two drives I hit, but I decided to hit it lower for a shot I felt more confident with. It ended up being really good and then I hit a half 8-iron (approach) onto the green, just the way I imagined, a high fade that I hit within 10 feet, and I made the putt,” said López Rivarola of his third eagle of the week, his second on 18.

Having missed four consecutive cuts, while recording only one round in the 60s prior to this week, López Rivarola doesn’t want to get ahead of himself.

“I feel I have been doing things well, staying within the goals I had for the first two days. I want to try and be consistent and see where that takes me come Sunday,” said the Buenos Aires native who claimed runner-up honors at the Dev Series Final last October in Riviera Nayarit, Mexico.

In Saturday’s third round, López Rivarola will be paired with Gallegos and Del Solar. They are scheduled to tee it off at noon.

The cut for the top-55 and ties came at 3-under 139. Fifty-six players qualified for the final 36 holes.

With his 63-63 start, tournament leader Jaime López Rivarola has tied the PGA TOUR Latinoamérica records for the first 36 holes and for any 36-hole stretch.

Solo second at 14-under, Andrés Gallegos started the day with eight consecutive pars before draining an eagle putt on 18, his second 3 at the 503-yard par-5 in the last 24 hours. “I’m striking the ball solid, and I’m hitting many great shots into the greens, so that has allowed me to remain under that. The putter didn’t work as well as it did [Thursday]. It took me time to make my first birdie, it was actually an eagle I made on my ninth hole (No. 18), and then on the back nine, the putts started dropping,” said Gallegos, who went on to birdie the next three holes for an eagle-birdie-birdie-birdie string that quickly moved him to 5-under for the day. A bogey on 4 halted his charge, but he bounced back with a birdie-birdie finish.

Andrés Gallegos is carrying a nice momentum, having won the Abierto Norpatagónico only 12 days ago in Bahia Blanca, Argentina. He claimed that Argentine Tour/Dev Series co-sanctioned event posting rounds of 68-62-63-65 (22-under) for an impressive five-shot win. If you add up his Brazil Open numbers this week, he has shot 36-under in his last six competitive rounds.

This is Andrés Gallegos’ best career start through 36 holes on PGA TOUR Latinoamérica. In 2018, he shot 66-64 to get to 12-under halfway through the Puerto Plata Open, an event he ended up winning by six shots at Playa Dorada Golf Club in the Dominican Republic.

Adding a bogey-free 66 to his opening 64, Chile’s Cristóbal Del Solar remains the leading player among those who entered the week inside the Totalplay Cup Points List top 10. Starting off No. 10 in the afternoon, the 28-year old Florida State University alum birdied holes 10, 13, 14, 18 and 4 to get to 12-under. “I had so many birdie chances, especially on the back nine, which is where I started today. I shot 1-under on the front, but I putted for birdie eight times,” he said about today’s bogey-free performance.

Cristóbal Del Solar has a tie for second and consecutive tie-for-fifth finishes in his last three starts on PGA TOUR Latinoamérica. Including this week’s scores, he is 47-under in his last 14 rounds. “I have been working on my technique for the last year and a half, trying to better my swing, and I think, my swing is now in a good, stable place, very consistent. I feel comfortable, just trying to do the same, checking the positions. It’s the hard work I have put on the last year and a half paying off,” added the two-time PGA TOUR Latinoamérica champion, winner of the 2018 Abierto del Centro and the 2019 Puerto Plata Open.

Only one shot behind Cristobal Del Solar, Mitchell Meissner has been playing superbly, as well. Holding the sixth spot on the Totalplay Cup standings, the Rice University alum has recorded three top-10s and has yet to finish outside the top 20 in five starts. Solo fourth at 11-under, he is on pace for another strong finish. “I think I have made a lot of strides in my game the last year, since second stage of Q-School. My coach and I, we have made a lot of progress, both mentally and physically, (improving) my swing and putting. We have probably been working together for 10 years now. My brother actually helped me with my short game back over the winter and I think that’s really helped a lot in the last few events. So, I feel like I’m continuing to get better, which I really like,” said the 25-year old from San Antonio, Texas, whose younger brother, Mac, is a Korn Ferry Tour rookie this season.

Argentina’s Jorge Fernández Valdés, theTotalplay Cup leader since the start of the season, shot 3-under 68 Friday to move into a tie for 40th at 4-under for the week. This is how the players inside the Totalplay Cup Points List top 10 stand through 36 holes:

Open-qualifying medalist Jesús Montenegro, who carded a 66 Monday to secure his spot in this week’s field, carded a 65 Friday to make his second cut of the season. At 7-under for the tournament, Montenegro enters the weekend tied for 16th. A solid weekend would be huge for the Mar del Plata, Argentina, native, who is looking to improve his Tour rank with the mid-season reshuffle happening after this event. He currently holds the 86th spot on the Totalplay Cup standings.

There were 19 Brazilians in this week’s field, but none of them made the cut. At 1-under 141, two shots outside the cut line, PGA TOUR Latinoamérica members Rodrigo Lee (73-68) and Rafael Becker (69-72) were the leading Brazilians this week.