López Rivarola birdies final hole to win by one in Brazil 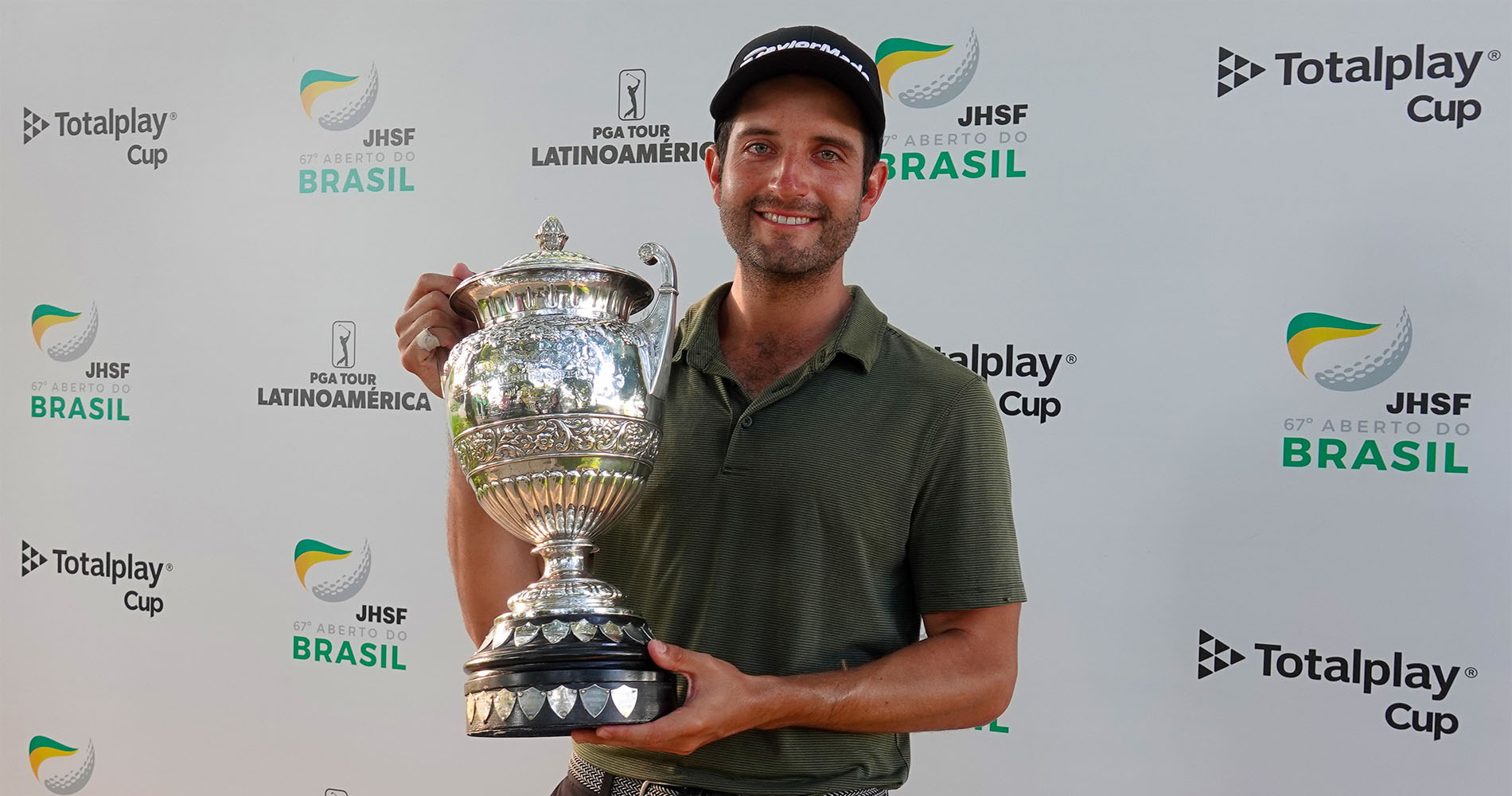 Trailing by two after a double bogey on No. 10, Argentina’s Jaime López Rivarola found the strength to claim the lead back with birdies on 12, 16 and 18 for a one-shot victory at the JHSF 67th Aberto do Brasil—the Brazil Open Championship.

Carding a 2-under 69 on the final day to finish at 20-under 264, the 27-year old became the fourth player from Argentina to win this season on PGA TOUR Latinoamérica. The win was his first on the Tour and it allowed him to charge into the seventh spot on the Totalplay Cup standings.

Rowin Caron of the Netherlands birdied 18 as well to card a 4-under 67 to take runner-up honors, at 19-under. Caron held a two-shot lead after a birdie on 10 but bogeyed 11 and 14 to slim his chances down the stretch at Fazenda Boa Vista.

López Rivarola’s final-group playing partners, Guatemala’s José Toledo and Chile’s Cristóbal Del Solar, shot even-par 71s to tie for third, at 16-under. Toledo had a disappointing finish, bogeying three of the final four holes to drop out of contention late.

“I knew there were going to be obstacles, situations that weren’t going to be under my control that I would have to deal with, and that’s exactly what happened on 10,” the winner said of the double bogey he recorded at the par-4 No. 10, where his tee shot went left into a hazard, forcing him to re-tee.

He kept his composure, making birdies on 12, 16 and 18 to walk away as a champion. “I knew the golf course and the game of golf were going to test me, and I did a good job understanding that and handling it well to accomplish my goal for the day,” he added.

His birdie putt at the par-4 16th was huge. He made a great read to sink a difficult 13-footer. “I had a weird angle into that pin. It was a tough putt I was able to make,” he said of the birdie that got him to 19-under with two holes to play.

López Rivarola reached the par-5 18th, a hole where he made eagle-eagle-birdie the first three days, without knowing what the leaderboard situation was. “I had no idea where I stood,” admitted the University of Georgia alum. “So, I decided to hit the shot I was more comfortable with all week, hitting driver regardless of the circumstances and I probably hit my best drive of the week. It was truly a great shot.”

From 180 yards he hit another great approach and then two-putted to secure the victory.

“Only my team, my parents, my girlfriend, know how tough it has been the last few months,” said López Rivarola of his struggles prior to breaking through this week. “I wasn’t happy with myself and with my game. I wasn’t in a good spot, but everyone around me got me through it.”

The JHSF Aberto do Brasil win allowed López Rivarola to rise from the ashes. He had missed the cut in nine of his last 13 starts on Tour, missing four cuts in a row with a very disappointing performance of 16-over in his last start at the Abierto del Centro in Cordoba, Argentina.

“I was able to look at golf differently. I came to do my part, and the rest was up to God and it worked out well. I was able to let go and did my best to avoid putting too much pressure on myself,” he said of an attitude that paid off big.

Argentines have won four of the six PGA TOUR Latinoamérica tournaments played this season. The following are the six winners through the JHSF Aberto do Brasil:

In solo second, Rowin Caron had his best career finish on PGA TOUR Latinoamérica. He had tied for third twice last season for his previous-best finishes. The 300 Totalplay Cup points he earned this week took him from 78th to 11th on the season-long standings.

Holding the Totalplay Cup standings’ eighth spot at the start of the week, Cristóbal Del Solar earned 162.5 points with his share of third at Fazenda Boa Vista. As Tour No. 4 he is now the highest-ranked player without a victory this season. The Viña del Mar native has been extremely consistent, finishing inside the top five in his last four starts: tied for second at the Estrella del Mar Open, tied for fifth at the Termas de Rio Hondo Invitational, tied for fifth at the Abierto del Centro and tied for third at the JHSF Aberto do Brasil.

Entering the day in a tie for 44th, at 3-under, Tour No. 1 Jorge Fernández Valdés showed his strength by firing a 6-under 65 to move into a tie for the 19th spot. The strong finish added 42 Totalplay Cup points to his season-long total, which is now 1,081. He extended his lead of 256 at the start of the week to 298 over second place holder Alan Wagner, who missed the cut.

“Playing solid all day, I gave myself many chances to have a good final round. It’s always important to add points every week. I take that away from this week. I gave myself the chance of playing all four rounds and earn rankings points,” said the 29-year old from Cordoba, Argentina, who has stayed atop the standings since his win at the season-opening VISA Open de Argentina in early December.

The following are the Totalplay Cup top-10 players after the sixth of 12 events on the 2021-22 schedule:

(Through the 2022 JHSF Aberto do Brasil)

PGA TOUR Latinoamérica is now headed to Lima, Peru, where the Diners Club Perú Open presented by Volvo is scheduled to start Thursday. The seventh event of the season will be staged at Los Inkas Golf Club, a venue welcoming the Tour for the ninth time since 2012.